Bremen will demonstrate how to integrate a new development into an already densely built-up urban neighbourhood. There is a very ambitious target of car-ownership of max 4 cars per 10 households and a share of sustainable modes of 80-85%, car trips only 15-20%. In the SUNRISE neighbourhood lab, about 100 private cars shall be taken off the roads.

Bremen (554,000 inhabitants) is a harbor city in the North of Germany. Industries, trade and administration are backbone of the economy. Bremen suffered severely under the structural changes of shipbuilding, fish industry etc. Still, the level of unemployment is above German average – causing also some financial restrictions.

Being a harbor city, Bremen is a centre of logistics activities. But nevertheless, the City has a high level of sustainable modes in the modal split of the citizens. In total, 60% of all journeys of Bremen citizens are made with sustainable modes – the bicycle is very present on Bremen’s streets with a 25% share, every fourth trip is done by bicycle. Bremen is a tram city – all public transport is overground. The tram is the backbone – being extended in the last two decades – even into neighbouring municipalities. The public transport system in Bremen is part of the regional public transport association (Verkehrsverbund) – 39 operators working jointly under one ticketing and information regime.

Bremen has recently updated its Sustainable Urban Mobility Plan (Verkehrsentwicklungsplan 2025) and won the European SUMP Award – not only for the ambition in terms of sustainable transport but as well for its innovative participation concept. Online tools were used in addition to concepts of proactive consultations (e.g. on Saturdays in shopping centres) and with an online scenario game. With this concept, new (younger) groups got involved – and the intense involvement on the political level led to an unanimous decision in the political bodies on the Bremen SUMP (2014).

The Bremen borough “Östliche Vorstadt” with its 29,700 inhabitants will see some new development on a former 10 ha large hospital area – bringing some additional 2,200 – 2,500 inhabitants in about 1,500 new apartments. There will also be the (spatially concentrated) hospital and related businesses within this area. As the existing neighbourhood already faces the typical challenges of overused street space, the integration of a new neighbourhood is a challenge. The mobility concept builds on increased use of the sustainable modes. There is a strategy to promote car sharing in the entire borough to reduce car ownership and reclaim street space. The new development will have a ratio of 4 parking spaces for every 10 apartments but will have high quality bicycle parking, car sharing and services for bike sharing, freight delivery, etc. as an integral part of an innovative mobility concept. Street space will primarily be dedicated to pedestrians and cyclists. A comprehensive participation process has already started (www.neues-hulsberg.de) and will be continued during the further planning and implementation process (2017 ff). The aim is sustainable mobility for the new inhabitants and improvements for the citizens already living in the borough.

The Borough ‘Östliche Vorstadt’ is an area with an extremely wide mix of social groups. It is currently undergoing gentrification. One of its main mobility challenges are its narrow streets. Parked cars from residents and visitors take away much of the street space, creating problems for other road users. Car parking is an extremely sensitive issue in this area.

The Borough ‘Östliche Vorstadt’ became a trendy inner city neighbourhood and provides an extremely wide mix of social groups – but with an over-proportional share of academics. The structure with many row houses of the “Bremen house” types has much individual ownership (by its residents). The area facesa process of gentrification but also densification.
The inhabitants of the borough “Östliche Vorstadt” are with 42.4 years younger than the Bremen average (43.9 years). In particular the “Steintor” area between Hulsberg and the inner city is with average 40.9 much younger. The share of migrants (5,863 as of 31.12.2014) is around 20%. The new “Hulsberg” area is quite attractive. According to a political decision, 30% of the new apartments will be provided as ‘social housing’ to disadvantaged groups.

The Östliche Vorstadt is a politically very active neighbourhood. When it was planned in the 60s to build an urban highway through the borough (“Mozarttrasse”), some strong opposition gathered and achieved a complete revision of the urban transport planning (1973). The borough was a centre of street fights, squatting and other intense forms of political processes. This political environment led to a strong green party (founded here in 1979) – being the first green party being represented in a Länder parliament (1979). The Green Party represents with 30.69% the strongest group in the lastest borough election (2015 – city wide 15.67%). Having also a Senator (councillor) responsible for urban development and transport from the Green Party, there are high expectations on participation processes.

A heavily (controversially) discussed issue is car parking. The narrow streets in the surrounding of Hulsberg are barely able to accommodate the number of registered cars. But on top, there are the visitors – of the many pubs in the borough as well as for the hospital, which has a range wide into the region.

To offer alternatives to car ownership, the City of Bremen actively promotes car sharing. The more than 11.000 users (2016) have taken more than 4,000 cars off the road. Especially for such inner city areas, car sharing promotion became a crucial part of strategies to reclaim street space.

The mobility concept builds on increased use of the sustainable modes. There is a strategy to promote car sharing in the entire borough to reduce car ownership and reclaim street space. The new development will have a ratio of 4 car parking / 10 apartments but will have high quality bicycle parking, car sharing and services for bike sharing, freight delivery etc. as integral part of an innovative mobility concept. Street space will primarily be dedicated to pedestrians and cyclists.

For many decades, the Hulsberg area was home to a large hospital which serviced Bremen and its wider surroundings. The hospital is in a process of spatial consolidation, which provides the unique opportunity to turn about 10 hectares of this area just to the east of Bremen’s historic centre into a new, predominantly residential neighbourhood. Mobility-related challenges, including disputes around parking and the use and design of public space in the new development and the surrounding neighbourhood are obvious issues to be dealt with during the re-construction period as well as in the longer term. The envisaged implementation action in Hulsberg is therefore likely to revolve around the space-efficient provision of mobility options, in particular through innovative car- and bike-sharing solutions, various other mobility services and related arrangements to facilitate convenient ways of car-free or car-reduced living. For the new development (Hulsberg), the intensely discussed mobility concept for a low car and low-carbon neighbourhood aims at a maximum level of car-ownership of 4 cars per 10 households. The share of the sustainable modes in daily mobility patterns of the new residents is targeted to be 80 -85%, car trips only 15 – 20%. The surrounding neighbourhood will develop a concept to reduce space consumption of parked cars and will carry out a pilot demonstration of re-allocating street space to walking, cycle-parking, greening etc. In the SUNRISE neighbourhood lab, Bremen wants to achieve the goal of about 500 new car sharing users – and about 100 cars taken off the roads. 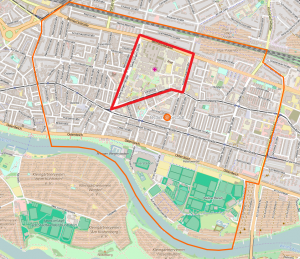 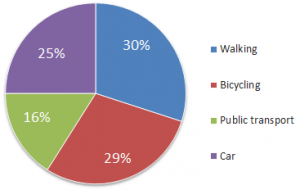 We use cookies to ensure that we give you the best experience on our website. By continuing to browse the site, you are agreeing to our use of cookies.Allow Cookies